UNVEILED in February of this year, Manchester city centre’s new combined heat and power plant integrates architecture and design excellence with high-performance and energy-efficient engineering in its extraordinary Tower of Light structure.

The nine-storey, 40m-tall tower supports and encloses chimneys for the city’s low-carbon energy centre, serving heating to a district spanning 2km, including several iconic buildings such as Manchester Town Hall and The Bridgewater Hall.

The building also functions as a source of entertainment for passers-by, providing a backdrop of light sequences and animations. Alongside architects Tonkin Liu, Arup was awarded the project to design the tower in autumn 2017. The collective vision for the project was inspired by the natural world and geometric shapes, where the strength the building required would not jeopardise its energy efficiency, material usage or beauty. It has resulted in a striking and iconic building that boasts a unique structural design that is grounded in the latest advanced digital modelling, analysis and fabrication techniques.

Central to the building’s purpose is providing efficient, low-carbon energy to power the 2km radius it covers in Manchester’s busy city centre. The building’s energy centre currently contains a 3.3MWe CHP engine and two 12MW gas boilers, and has been built with changing demand in mind, with the capability to add future energy technologies without disruption to the supply. 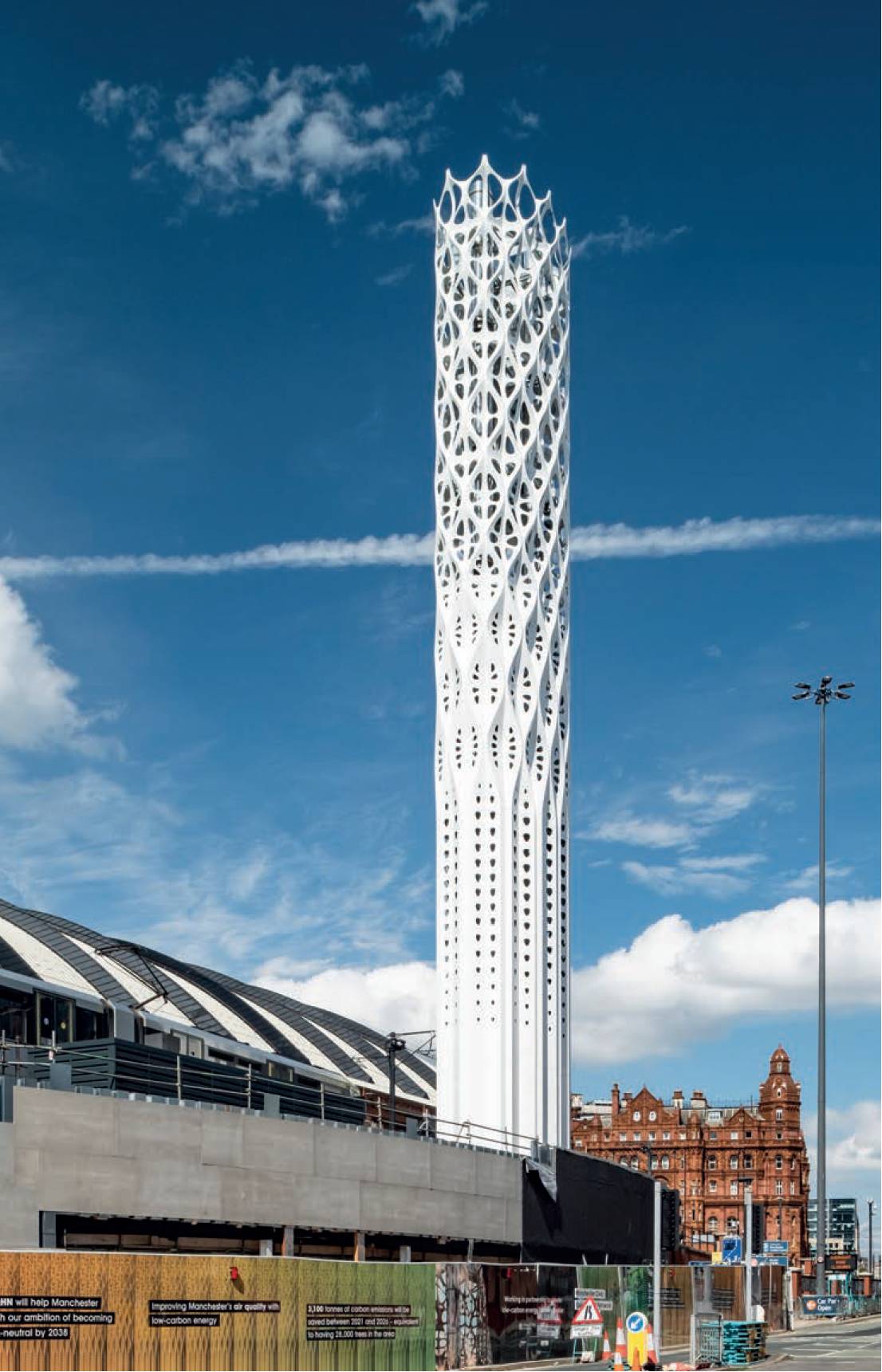 Heat from the power-generating engine is also used to create hot water, distributed through insulated districted pipework across the city network. This technology improves efficiency by as much as 45%, saving Manchester 1,600 tonnes of carbon emissions each year, and contributing towards the city’s goal of becoming carbon neutral by 2038.

However, the building also functions as a source of entertainment for passers-by, providing a backdrop of light sequences and animations, meaning there is a requirement for it to be lit at all times.

Energy for this is powered by the wind which causes reflectors in the tower to move and reflect sunlight into the tower’s chambers during the day, and in the evening LED lights are directed at the reflectors to have the same effect.

The building is defined by its core structural design – the iconic skin of the tower which contains five chimney flues and acts as both the primary structure of the tower and as its façade.

This skin is known as a shell lace structure. Inspired by the natural world, this method is one which Arup and Tonkin Liu have pioneered together for over a decade. The Tower of Light is the largest built structure using this method to date.

In line with the building’s sustainability credentials, the light and thin single-surface structure uses as little material as possible without compromising on the final impact.

The flat steel sheets are between just six and eight millimetres thick at the bottom of the tower and taper to an elegant four millimetres in width towards the top.

The cut plates are bent and welded together at the seams, providing stiffness and strength that negates the need for any additional structural support.

The Wall of Energy

The Tower of Light harnesses innovative processes to not only fulfil a practical and necessary purpose, but to create a landmark, iconic design structure which has sustainability at its core and places the future of the community front and centre.

Alongside the tower stands a 63m long and 4-6 m high street façade enclosing the new energy centre, named the Wall of Energy designed by Tonkin Liu.

The tessellated interlocking lozenge tile pattern, made with 31 different tile types across 1,373 tiles, was chosen with nature in mind.

Representing the energy the earth provides in a nod towards the building’s purpose, the tiles produce undulations and evoke images of patterns left by ocean waves in the sand.

Visually, the tiles are also reflective, mirroring both the busy city centre streets, and the sky, reiterating the potential for synergy between the built environment and the natural world.

The combined expertise of Arup’s engineers and Tonkin Liu’s architects has led to an urban modern building.

The Tower of Light harnesses innovative processes to not only fulfil a practical and necessary purpose, but to create a landmark, iconic design structure which has sustainability at its core and places the future of the community front-and-centre.

It's a building that serves as a positive case study for the wider construction industry as it continues the push towards sustainable development and future adaptability in its projects.