From Newlyn to new technology

JUST over 100 years ago, a mean level ‘datum point’ was established as the starting point for every height measurement in the country and Newlyn in Cornwall placed itself firmly on a map of its own making. It took six years of hourly tide gauge readings for Newlyn’s Tidal Observatory to become the home of mean sea level for mainland Great Britain. The design of this tidal gauge was extremely simple with measurements based on a float sitting within a seawater intake well measuring the rise and fall of the sea. These variations were then recorded on paper attached to a rotating drum which was connected to the float via a pulley system.

Today, the UK Tide Gauge Network comprises approximately 45 gauges (all of which can be related through the national levelling network to Ordnance Datum Newlyn) and has been relied upon to provide the data used for tidal analysis and prediction, oceanographic research, coastal defence and as a storm surge warning system. With the current Environment Agency-owned network now being used primarily for flood forecasting purposes, the National Oceanography Centre (NOC) is developing scientific quality tide gauges at key locations, designed to maximise accuracy and efficiency through innovative use of technology such as radar and the KOREC supplied Trimble Alloy global navigation satellite system (GNSS) receiver.

The National Oceanography Centre is playing a part in a number of the projects related to sea level measurement: 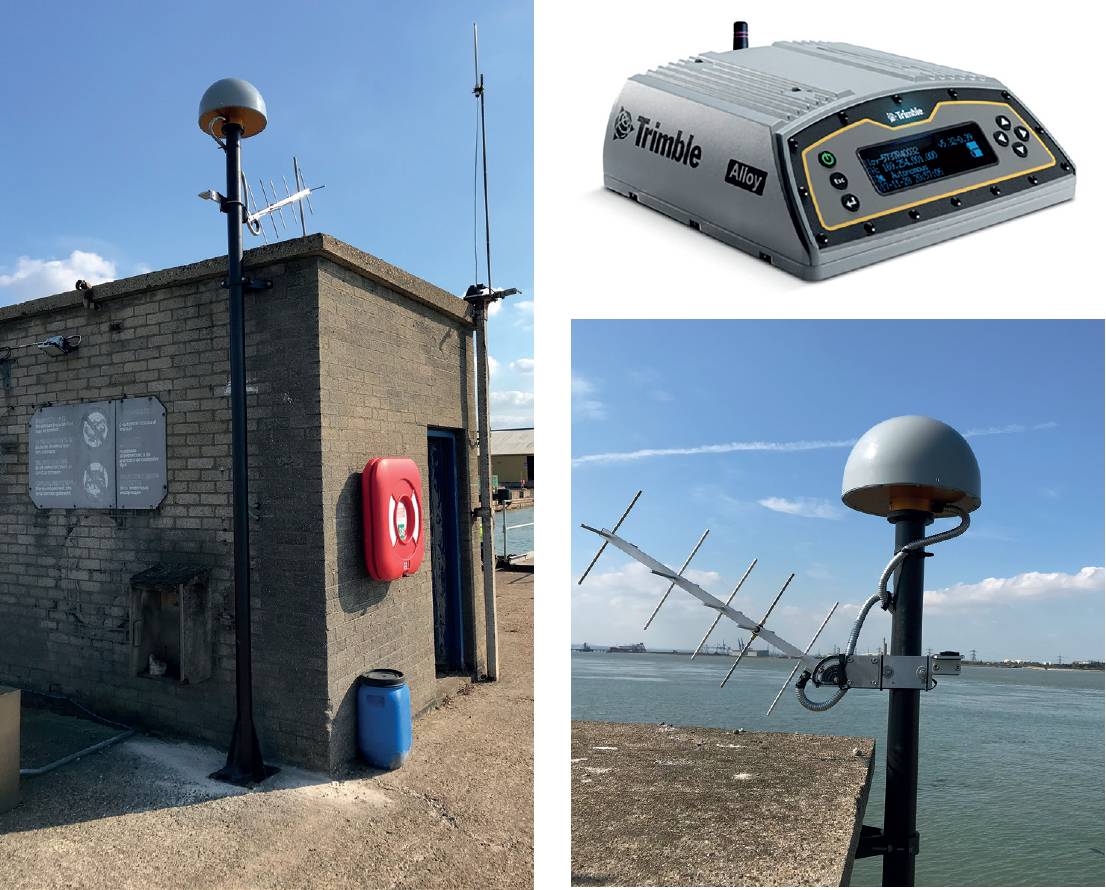 Left: Trimble’s Alloy receiver.  Left and bottom right image: System set up in Sheerness – the antenna, which receives the GNSS radio signals, is connected by a cable to the Trimble Alloy which in this case is inside a nearby building.

Behind the NOC’s involvement in these projects are a number of industry experts, including Dr Angela Hibbert, head of the Sea Level and Ocean Climate Group, Dr Simon Williams, a specialist in GNSS-Interferometric Reflectometry (GNSS-IR ), and researcher and specialist in radar for mapping, Paul Bell.

While some of the ‘floats and stilling well’ systems such as the one at Newlyn, are still in use today, the advancement of technology has seen an increasing use of acoustic, radar and pressure sensors.

While some of the ‘floats and stilling well’ systems such as the one at Newlyn, are still in use today, the advancement of technology has seen an increasing use of acoustic, radar and pressure sensors.

For a tide gauge to reach the technical standards of the Intergovernmental Oceanographic Commission’s (IOC) Global Sea Level Observing System (GLOSS) program, it must fulfil certain criteria like have a co-located GNSS to measure land motion, be able to transmit in near real time and at a sampling high rate (of at least one minute).

The team at NOC wanted a system that could achieve this but also keep maintenance costs down. Using radar and GNSS was the answer.

How the radar/GNSS methodology works

Currently, hundreds of GNSS stations are deployed around the coast of the British Isles that are, by chance, also recording data that can be used to measure sea level. Most of these sites are also co-located with a tide gauge since they are used to measure the vertical land movement at the site – an important factor in sea level research since you need to know if it is the sea rising and falling or the land.

Dr Simon Williams felt that the existing technology provided an opportunity to build on a methodology that records sea level using a combination of radar and GNSS-IR. In this way the GNSS reading can be used to back up the radar reading (the radar is a separate device) or used for verifying the radar’s readings.

GNSS-IR is a technique that uses data from geodetic-quality GNSS instruments for sensing the near-field environment. In contrast to positioning, atmospheric and timing applications of GNSS, GNSS-IR uses signal to noise ratio (SNR) data.

As a specialist in this field, Dr Williams wished to use this methodology for the new approach to sea level measurement.

The receiver and an interesting contradiction

The alloy also filters out ‘noise’ such as the radio signals bouncing off the sea.

On this project, the Trimble Alloy receiver was selected. A lot of sea-level instruments are hard to maintain in harsh environments such as Antarctica, the Arctic and Greenland. GNSS-IR can operate well in challenging conditions.

The alloy also filters out ‘noise’ such as the radio signals bouncing off the sea – and here is where the contradiction occurs. It is impossible for any GNSS to filter out all the noise and in this case, the NOC is using the SNR from multipath interference, along with a specially written algorithm, to calculate sea level.

The GNSS and radar are set up on land (instruments like radar have to be set up above the water on a vertical structure), so the receiver is also being used to record vertical position in order to separate land movement from potential sea level rise. Accuracy is dependent on many factors, but daily averages can be as good as one to two centimetres.

In September 2021, the NOC team visited Sheerness in Kent where the system was mounted on a pole attached to the side of the tide gauge hut on the pier. Once the system was installed, Dr Williams was then able to log in remotely to finish the set up and latterly check the system’s health.

The system was set up to send back 15 minute bundles of, five-second data in compressed RINEX. Dr Williams then uses scripts to take the SNR data and the navigation messages to produce the data he requires to estimate sea level every 15 minutes. At the end of each day he creates a combined daily five second file and a 30 second file which is then sent to SONEL (Système d’Observation du Niveau des Eaux Littorales) which is the GNSS archive for GPS at Tide Gauges. SONEL process the data to produce daily positions. The data also goes to the Nevada Geophysical Laboratory who process 10,000-plus sites daily for positions.

A game-changer for coastal monitoring programs

This work is now Dr Williams’ research in collaboration with his colleagues at NOC where the aim is to develop the technology and methodology for many deployments of the system.

The ability to measure sea level, significant wave height (and even beach profiles) could be a game-changer for coastal monitoring programs.

Just over one hundred years after the mean level datum point was established at Newlyn, the NOC team is likely to take ownership of the set up installed there by the University of Nottingham.

One of the first changes the team will make is to switch from Trimble’s NetR9 receiver to Trimble’s Alloy and Newlyn will again be home to some groundbreaking technology.

The technical bit – how the system works

The satellite elevation angle is known so the NOC can use the SNR patterns to measure the height of the reflector below the antenna and hence the sea level. Significant wave height comes from the fact that the rougher the water the quicker the signal will decorrelate and decay with elevation angle. In short, measure the decay and you get a proxy for significant wave height.

All information and images supplied by Dr Simon Williams, specialist in GNSSInterferometric Reflectometry (GNSS-IR) at the National Oceanography Centre.