Why secure GPS receivers are crucial for GNSS/INS systems?

WITH the growth of automation and robotisation in many industries, from agriculture and delivery drones to self-driving cars, the demand for accurate and affordable navigation is on the rise. When selecting a GPS/GNSS1 positioning receiver it is crucial to understand vulnerabilities of these sensors and the effect they could have on the navigation system. For robots and autonomous devices availability is key to ensuring continuous and reliable service.

Safety also needs to be considered for robots and drones operating close to people. GNSS (Global Navigation Satellite System) jamming or spoofing needs to be detected and flagged immediately so that other sensors can take over.

Most autonomous navigation technologies include an inertial navigation system (INS), which consists of a GNSS receiver and an inertial measurement unit (IMU) sensor. While the GNSS receiver provides absolute positioning in terms of geographic global coordinates, the IMU measures heading, pitch and roll angles which give orientation information of a moving system.

Spoofing is a real threat to GNSS-based INS systems, which is mitigated most effectively by incorporating security mechanisms into all system sub-components. However, since spoofing takes place on the level of the GNSS signal, a number of sophisticated methods can be employed within the receiver to detect and mitigate spoofing. Receivers which are designed with security and robustness in mind, are resilient to GNSS vulnerabilities such as jamming and spoofing. Taking advantage of such robust GNSS technology is also cost-effective, allowing companies to focus their development on sensor fusion and navigation.

Jamming and spoofing are real 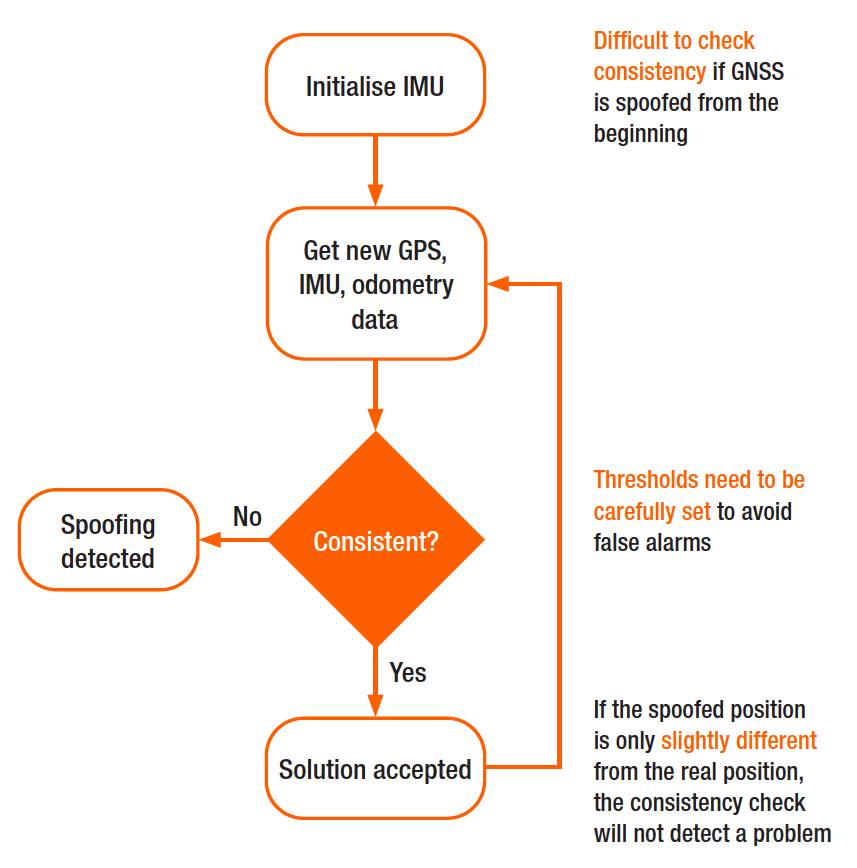 Figure 1: GNSS/INS systems commonly check positioning for outliers to detect spoofing. However, if the spoofer uses small positioning increments, which are within thresholds allowing for drift, it would not be detected by this mechanism.

Jamming is a kind of radio interference, which overpowers weak GNSS signals, causing accuracy degradation and possibly even loss of positioning. Unintentional jamming sources include radio amateurs, maritime and aeronautical radiolocation systems as well as electronic devices located close to the GNSS receiver.

Jamming is a kind of radio interference, which overpowers weak GNSS signals, causing accuracy degradation and possibly even loss of positioning. Spoofing is an intelligent form of interference which makes the receiver believe it is at a false location.

There are also intentional jamming devices called ‘jammers’, which are sometimes found on board of vehicles trying to avoid road tolling.

Spoofing is an intelligent form of interference which makes the receiver believe it is at a false location.

Spoofing has appeared in the news in a spectacular experiment where a Tesla car was ‘misled’ to take an exit from a highway rather than following the highway as it was supposed to2.

Consequently, both jamming and spoofing can have an adverse effect on INS systems, which make use of GNSS positioning.

How can INS get jammed and spoofed?

While GNSS provides absolute positioning, the IMU measures relative movement, which is subject to a cumulative error called drift and needs regular recalibration. In a GNSS/INS system both sensors are fused in such a way that the GNSS provides regular IMU calibration and the IMU provides angles and extrapolation or smoothing of GNSS.

Jamming, which results in loss of positioning, means that the GNSS receiver can no longer be used as part of the INS solution.

This can lead to longer INS initialisation times or a switch to dead-reckoning mode (IMU solution only), where the position would start to drift. Jamming can also result in measurement outliers, which impact GNSS/INS algorithms (ie. deep or tight coupling).

During a spoofing attack an INS solution could be hijacked if the spoofer uses small increments in positioning, which can go undetected by common anti-spoofing methods.

However, it is spoofing which poses the highest security risk for GNSS/INS systems. During a spoofing attack an INS solution could be hijacked if the spoofer uses small increments in positioning, which can go undetected by common anti-spoofing methods.

Using sensors other than GNSS such as an IMU or odometry can help flag spoofing by detecting inconsistencies between GNSS and the other sensors.

While such sensors help reduce spoofing risks, they are not sufficient to provide full protection because they only output relative positioning which is subject to drift.

For example, the GNSS/ INS systems can have a drift of a metre or more when visibility of GNSS satellites is lost for longer periods. Spoofers can exploit this drift phenomenon to hijack positioning gradually, in increments comparable to the expected drift.

A common mechanism used by GNSS/ INS systems to detect spoofing is shown in Figure 1.

Spoofers can exploit this drift phenomenon to hijack positioning gradually, in increments comparable to the expected drift.

The system is initialised and starts receiving new GNSS, IMU and/or odometry data, which is continuously checked for consistency.

If the spoofing attack keeps positioning increments within the allowed thresholds, which are set to allow for drift, it would go undetected by such a mechanism.

That is why, for best system protection and anti-spoofing, resilience should be built into several system components on both GNSS and INS levels. 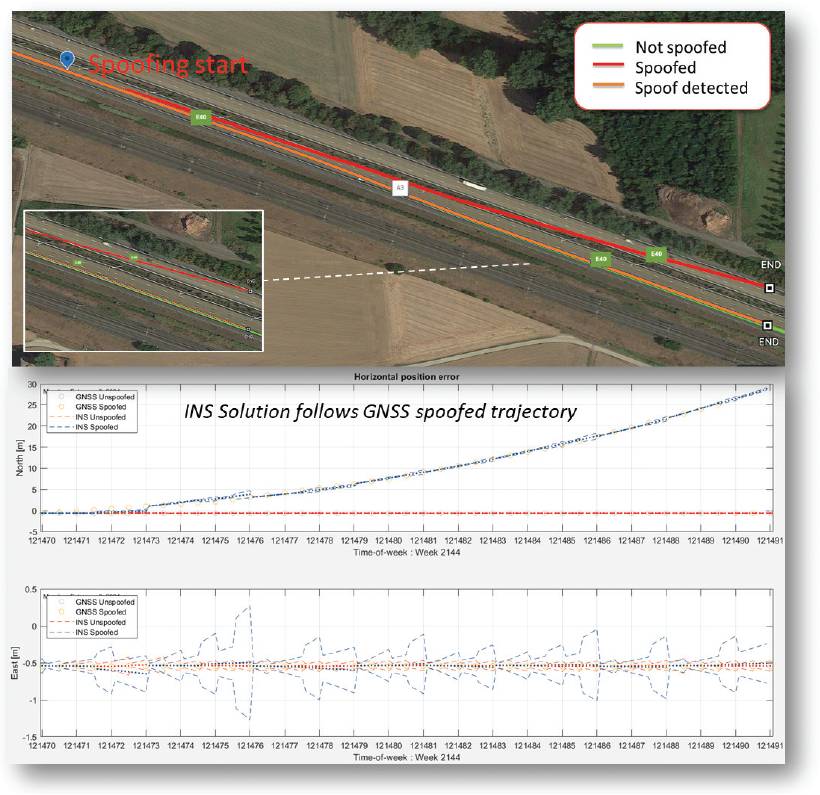 Spoofing is best detected within GNSS

The vulnerability of this common INS spoofing check is shown in Figure 2, where the spoofing attack is executed gradually, in small increments perpendicular to the direction of motion.

The magnitude of these spoofed increments is small enough to be below the drift threshold of the IMU, which makes it acceptable for the INS system shown by the red line.

If the spoofing attack keeps positioning increments within the allowed thresholds, which are set to allow for drift, it would go undetected by such a mechanism.

The system shown by the orange line, with anti-spoofing built into the GNSS receiver, rejects the spoofed signal and switches to dead-reckoning, which allows it to stay on the right track.

If the spoofing attack is limited to a few signals, then the GNSS receiver can even avoid the attack by discarding these spoofed signals from its positioning solution.

As shown in the road test above, an INS system will be more resilient if the GNSS receiver can indicate spoofing or, even better, if it can mitigate spoofing by itself.

Thus, when integrating GNSS/INS solutions it remains crucial to understand the role of protection mechanisms in GNSS and to select a GNSS receiver with a strong internal anti-spoofing defence system or a warning system.

Septentrio receivers also provide lots of information about GNSS signals, allowing users to get insights into the spoofed signal such as timestamps and power levels.

A GNSS receiver which implements security measures in its design will include spoofing resilience at various levels.

For example, the Septentrio AIM+ advanced interference mitigation technology is a jigsaw puzzle of various anti-jamming and anti-spoofing components built into receiver hardware as well as software: 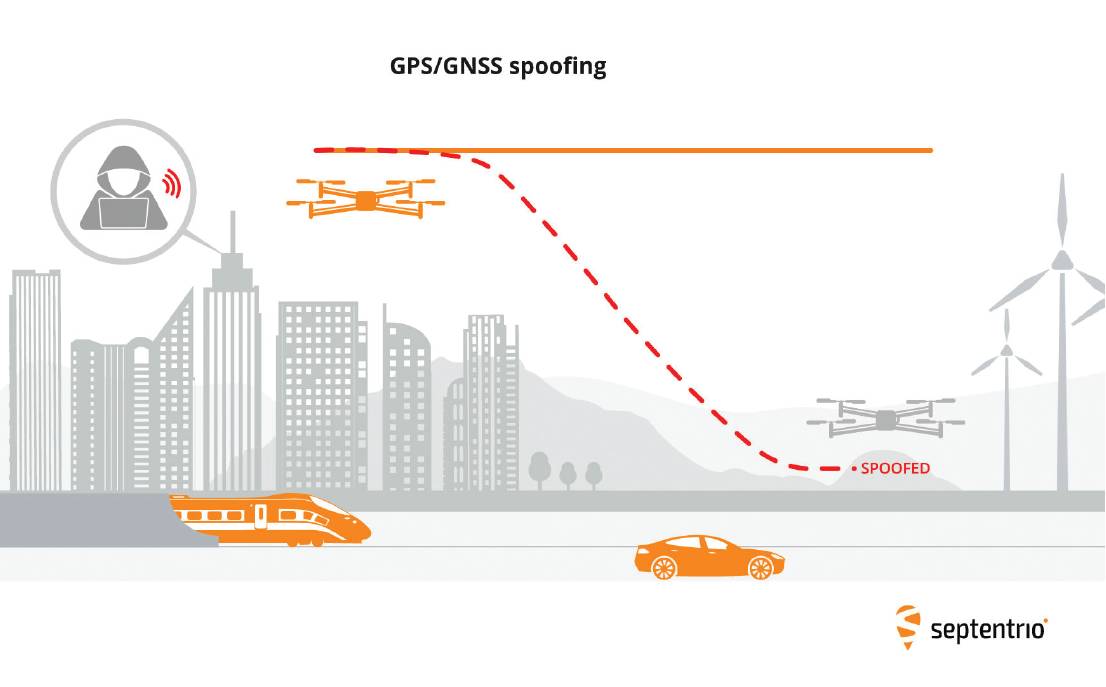 Both the GNSS receiver as well as the INS have their own mechanisms for spoofing protection, however the best resilience comes from the combination of detection and mitigation mechanisms working together on component level.

Maintaining security at the receiver core

As in any field affiliated with security, continuous improvement is needed to maintain effective antispoofing and anti-jamming mechanisms.

As in any field affiliated with security, continuous improvement is needed to maintain effective anti-spoofing and anti-jamming mechanisms. GNSS manufacturers have a responsibility to strive for the most effective security methods in view of the increasing threats which confront today’s GNSS users.

By investing in GNSS receivers with built-in resilience, integrators can leave the security maintenance to the GNSS manufacturer and focus their efforts on core business and sensor fusion.

In fact, the concepts discussed in this article are valid not only for GNSS/INS systems but for any sensor fusion system, which includes a GNSS receiver. Smart GNSS technology protects receivers from jamming and spoofing at the core level, ensuring safe and reliable system operation.

2 Tesla Model 3 spoofed off the Highway – Regulus Navigation System hack causes car to turn on its own.  https://www.regulus.com/blog/tesla-model-3-spoofed-off-the-highway-regulus-navigation-system-hack-causes-car-to-turn-on-its-own